Gabriela Gamez: An Advocate for Latino Education and Well-being

There are many reasons why we are so blessed to have the community health workers we have in the state of Maryland. As our Boots on the Ground campaign has progressed, MALVEC has had the luxury of speaking with many incredible community health workers and hearing their stories. With this next person we have, it is clear that education is an important factor not only for our workers, but for our communities in general.

Gabriela Gamez was brought to the United States at a young age in the 1980s. His family had emigrated from Nicaragua and settled in Oxen Hill, located in the southern part of Prince Georges County, Maryland. Gabriela and her three sisters attended public schools in the county and continued their university studies.

Gabriela attended Prince Georges Community College, where she received a NASA scholarship awarded to students in STEM. After her time there, Gabriela entered the James Clark School of Engineering at the University of Maryland. He ended up graduating from college with a degree in Biological Resources Engineering.

There is a lot of pressure for those who are first generation students, it is difficult to navigate the university world without a lot of guidance. However, Gabriela was able to do so and was the second of her sisters to graduate. She was only a few months away from beating out her sister for being the first to graduate, who turned it into a friendly competition (as most siblings do).

After obtaining her degree, Gabriela took on several jobs. She started as an interpreter and, soon after, was approached by the principal of a county school to be hired as an interpreter for the school. This initiated Gabriela’s involvement in the school system, where she is now a community school coordinator. Gabriela is also co-chair, coordinator of the Latino and immigrant outreach task force for Greater Riverdale.

It is clear that there is an emphasis on education for Gabriela. For her, education is the key to success. The Latino community will only grow stronger through education and by creating more opportunities for us. Gabriela takes pride in her work and in seeing the success of others she has helped. “What is the most rewarding thing I feel about doing my job? Seeing others succeed. Seeing other families succeed in the same way that I succeeded, but that’s different for every family, as long as they have a sense of accomplishment. So, you know, that makes me feel fulfilled in what I do. That’s my calling.”

There is much work to be done to help our Latino community during these difficult times. The potential of our community is very high and we must make the most of it. Stories like Gabriela’s are an excellent example of not letting obstacles stand in your way of achieving your dreams. Not only can we achieve these dreams, but in doing so we can create change and a better future for generations to come. 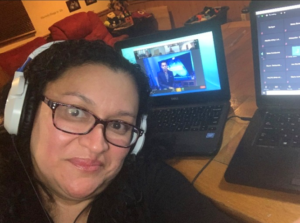 Ivan Mejia: The Educator and Lifeguard
Yuliana Macey: A Voice for Her People